My Opinion – Cover To Cover

Helping inspire you to be your best by delivering great content

Helping inspire you to be your best by delivering great content 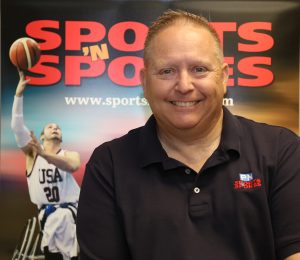 In the November issue, I threw out a challenge for you to strike the same pose as Richard Corbett did on Muscle Beach, which won the 2019 SPORTS ’N SPOKES Wheels Up! Photo Contest.

As of today, I haven’t received a single picture of anyone else pulling off that feat. Gracing the cover of the magazine is pretty cool, and I sometimes think of Dr. Hook & the Medicine Show’s hit song from the 1970s, Cover of the Rolling Stone, when we’re trying to make that ever important decision for each issue.

It may not be quite as renowned as Rolling Stone, but we like to think the cover of SPORTS ’N SPOKES (S’NS) ranks right up there for wheelchair athletes. But whether you ever make the cover, or even a photo inside, isn’t as important to us as helping inspire you to be your best by delivering great content to you in each issue.

When it comes to this month’s issue, we’re kicking off a big sports year. It’s a Paralympic Games year, with the 2020 Summer Games taking place in Tokyo in late August and early September.

The first time the word Paralympic was used was at the 1964 Games in Tokyo, and Steve Florescu was there competing and providing coverage for PN magazine. That was 11 years prior to the creation of S’NS, and PN was one of the only publications providing coverage of major wheelchair events.

In the January 1965 issue, Steve, a World War II veteran and sports coordinator for Paralyzed Veterans of America, recounted his experience of competing in Tokyo. He was amazed by the experience and wrote, “My impressions of Japan can well be summed up in the words of our team director, Mr. Ben Lipton: ‘The overwhelming hospitality of the Japanese people was astounding.’”

He acknowledges many of the friends he made during the Games, but one acquaintance Steve made who really caught my attention was Ludwig Guttmann, founder of
the Paralympics.

Steve competed in Class A-1 and took home the gold medal in men’s singles table tennis, as well as a bronze medal in swimming the 25-meter freestyle.

The competitors in Tokyo this summer won’t have the honor of meeting Guttmann, but I’m certain they will meet some other great people. As Steve put it in his article, “Within a span of a few days, I had made quite a few friends among team members of other nations and among our gracious hosts …  The fun, friendships, and competitions were exciting and most enjoyable, but by the end of the week, I felt I had just finished a six-day bicycle race in a wheel barrel.”

It’s been 56 years since then, and PN now has this sister magazine dedicated entirely to wheelchair sports and recreation. Follow the coverage here, on our website at sportsnspokes.com and on social media.

Who knows? You or someone you know may even end up on the cover.