Insights on the book, Wheels of Courage.

Wheelchair basketball has universally been accepted as the first organized wheelchair sport and its creation credited to paralyzed World War II veterans.

A new book by author David Davis sheds light on the underlying and powerful reasons that spawned the creation of wheelchair sports. Told through the eyes of wheelchair sports pioneers, Wheels of Courage gives you a heightened appreciation for the sacrifices of our World War II veterans. 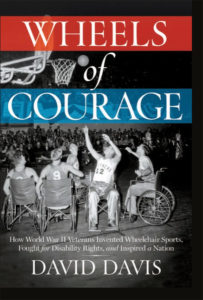 The book specifically brings awareness to paralyzed veterans and their fight to change the stereotypical perception of people who used wheelchairs for mobility. It also gives you a deeper understanding of why the development of sports for people with disabilities was more about rehabilitation than recreation.

In early 2016, I was doing my own research here at PVA Publications to identify World War II-era Paralyzed Veterans of America (PVA) members. I wanted to capture the stories of the people who were active during the early years of the organization — before it was too late.

I had a fairly sizable list, one that unfortunately has become much smaller since then. On that list was Gerald “Jerry” Fesenmeyer. At the time, he was honestly just another name on the list, a person I had yet to contact. Later that year, I received an email suggesting a story idea.

The email was from Davis and contained a link to an article in Los Angeles Magazine titled How SoCal Doctors Used Basketball to Rehabilitate Paralyzed Vets.

The article was about the amazing journey of injured World War II veterans, one of whom was Jerry. His story seemed more like a Hollywood movie than anything that could have really happened. I immediately dug out that list of veterans to see if he was on it. Not only was he on the list, he was also a PVA charter member.

Three weeks later, I was on a flight, along with editorial coordinator John Groth, to meet this amazing man at his home in south Texas. Jerry didn’t disappoint, and to say he was “a character” would be an understatement.

A picture of Jerry was placed on the cover of the May 2017 issue of PN magazine, and his story was covered in the feature article Hanging In There.

I’ll never forget the time I spent  with Jerry, and now two years after his passing, I was thrilled to learn even more about him in Wheels of Courage.

Another veteran in Davis’ new book was someone I had personally considered a friend. Carlos Rodriguez, who died in 2012, was a PVA past national president. I met Carlos in 1990 at a PVA convention, but until now, I had no idea he had played wheelchair basketball. After being injured in the Korean War, Carlos returned to New York, where he played wheelchair basketball with the Brooklyn Whirlaways, one of the sport’s oldest civilian teams.

Whether you know a great deal or very little about wheelchair sports, you’ll come away from this book with a much greater understanding of their creation and why they were so incredibly important.

The seemingly absurd concept in the 1940s of playing any kind of a sport from a wheelchair and how that idea transformed from an exhibition game into a worldwide sanctioned competition is chronicled in a truly engaging and enjoyable read.

Congratulations, David, on a book that tells the story of so much more than the creation of wheelchair sports.