The preliminary stage is set for World champions to meet Paralympic prizewinners on the paint in tight wheelchair basketball contests at the upcoming Paralympic Games in Tokyo, Japan. The International Wheelchair Basketball Federation (IWBF) at Stoke Mandeville Stadium in Aylesbury, United Kingdom was joined by British Olympic sprinter Jeanette Kwakye to confirm the competition groupings on May 12.

Contests will start on August 25 and be played over an eleven-day schedule through September 5 in a round robin format, to determine this year’s victory ceremonies at Ariake Arena in Japan’s capital city.

A total of 22 teams representing 12 countries qualified for the Games, and selections were seeded based on their final placement from their respective Zonal qualification tournaments.

The top four teams in each grouping will face one another in a series of classification play-offs and meet in the semi-finals prior to tip-off for the gold, silver, and bronze medal rounds on September 4 for the 10 women’s teams and September 5 for the 12 men’s squads. 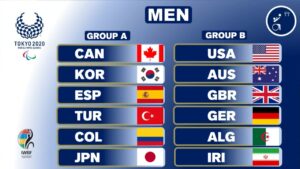 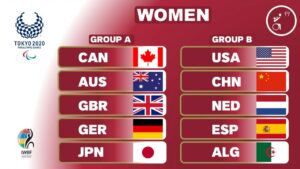 Also in the women’s contests Group B sees the reigning Paralympic Champions from Team USA drawn against World Champions the Netherlands and pressure will come from China. Spain is returning to the floor for the first time since the 1992 Barcelona Games and completes the group along with Algeria.

For the men’s competition, the top four finishers – Great Britain, USA, Australia, and Iran – from the World Championships in 2018 make up Group B, with Germany and Algeria. Japan chose to be placed in Group A with Canada, Korea, Spain, Turkey, and Colombia.

IWBF President, Ulf Mehrens said the draw is an important step as teams plan, and, builds excitement. “Competing at a Paralympic Games is the pinnacle of a wheelchair basketball players’ career, and this year will be no different for the 264 players that will represent their country in Tokyo,” he said.