Piers Park Sailing For All

Away from the swirling, biting winds typical of the first weekend in February, the modest Piers Park Sailing Center in East Boston, Mass., stands at the edge of the water in Boston Harbor, teasing the city about its current frozen state with hints of an endless summer. 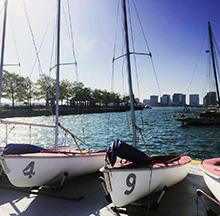 The sunlight streamed into the office of executive director Alex DeFronzo through several windows, warming the room and sporadically casting shadows across the maps and photos, both old and new, of Boston and the city’s Harbor Islands that hung above shelves that housed books about topics related to fishing and sailing. In the empty spaces on the walls, a seemingly infinite number of letters and cards were displayed. Some were scribbled by children wielding markers and construction paper; others were written carefully on cards picked out specifically for this occasion.

Regardless of the author, each of the cards came from a participant in one of Piers Park Sailing Center’s many all-inclusive programs for children and adults alike – summer camps, after-school programs, learn-to-sail classes and U.S. Sailing certification courses.

“It’s got that exclusive, elitist vibe,” DeFronzo said of the sport he learned as a child, growing up in Boston and attending rowing camps at Piers Park. “We want to destroy that.”

In an effort to get as many people as possible out on the water, all of Piers Park Sailing Center’s programs are open to all ages and all abilities. The Center’s fleet of “SONAR” sailboats can be customized with 20 different adaptations to accommodate varying levels of disabilities, including different styles of seats and steering modifications. Most recently, they added “sip and puff” chairs, which allow sailors to move the boat by breathing.

DeFronzo said Piers Park Sailing Center served 1,100 children last year – 300 of whom self-reported a physical or cognitive disability. In addition, the Center has 130 active and returning adult members. DeFronzo works with just one other full-time staffer year-round, but during the sailing season his staff increases to between 30 and 35 members, all of whom grew up sailing at Piers Park.

Self-reporting a disability or requesting adaptive services does not place any participants into separate programs, but rather allows them to access the resources or adaptations they may need while taking part in the same activities alongside able-bodied peers.

“Once you’re in the boat, it’s a very equitable experience,” DeFronzo said. “It’s an equalizer. It’s a sport pretty much anybody can do.”

DeFronzo picked one card out from a pile on his desk and read it aloud.

“This one is from the U.S. Air Force Academy,” he grinned, bringing the card closer to his face to read the inscription. “‘Thank you so much for spending time and effort to make a sailor out of an aviator.’”

The note came from a veteran who had participated in Piers Park Sailing Center’s “Heal on the Water” program, which ran for seven weeks last summer in conjunction with the Bedford Veterans Affairs Medical Center.

On Fridays in May and June 2017, 20 veterans who were receiving inpatient care for their physical or mental health gathered on the water to relax and refresh. Many of the participants in the program continued with sailing lessons following the conclusion of the program, according to DeFronzo.

DeFronzo earned his bachelor’s degree at the University of Massachusetts, Lowell, and attended Suffolk University, where he obtained a master of public administration in 2016. He took over as executive director of Piers Park in April 2017 after spending several years working in group homes and is looking forward to beginning his second sailing season in the position, Piers Park Sailing Center’s 20th season in operation, as the Boston winter gives way to warmer weather this spring.

“Going out sailing can, for a lot of people, be a lifelong interest that they have,” DeFronzo said. “Most people underestimate the amount of skill and effort that it takes, but once they start doing it and fall in love with it, for many people it becomes something they want to continue forever.”

For more information about Piers Park Sailing Center, visit them on the web or email Alex DeFronzo at adefronzo@piersparksailing.org.

Jenna Ciccotelli, our first official iSpoke journalist, is a second-year journalism student at Northeastern University in Boston, where she’s already worn many hats in the independent student newspaper’s sports section, including sports editor. This year she will be working full-time as a communications assistant with Northeastern Athletics.