Powering To The Paralympics

The first races of a postponed U.S. paracycling season bring its stakes back up to speed

The first races of a postponed U.S. paracycling season bring its stakes back up to speed

For athletes putting in serious bids for spots on this summer’s Paralympic team that will compete in Tokyo, the U.S. Paralympic Cycling Open held for the first time in Huntsville, Ala., April 17-18 was a place to tune.

This return to domestic racing was the only chance competitors have had since last year’s season to size each other up – who got faster, who is not as fast and what topping these podiums means for their chances in the UCI Para-cycling Road World Cup May 6-9 in Ostend, Belgium.

Their test on day one of time trial action was a cone-to-cone technical course around the Cummings Research Park, which three-time Paralympian Oz Sanchez (San Diego, Calif.) said gave him no time to rest.

The loop pushed limits of riders’ power on five uphill battles and equal number of downhill runs, allowing average speeds of 30 kph while heading out into optimum winds at 1-minute intervals.

The 2019 World Cup winner Travis Gaertner (Burien, Wash.) said its 11 turns, plus two wide-open 180’s gave riders more space than they have internationally, which accounted for the fast times.

Gaertner was known in his Paralympic wheelchair basketball career as Team Canada’s speediest athlete. In Huntsville’s men’s H4 road race (1 hour, 12 minutes and 47 seconds) and time trials (21:04), he finished second to 2016 Paralympian Tom Davis (1:09:19), from Fremont, Ind., who sits in first on the current national rankings list. Gaertner is third.

In other cases, world champions got outpaced by those to keep an eye on, such as Team Semper Fi Fund’s rider Dennis Connors (Portland Ore).

Conners bumped the current road racing champ, Ryan Boyle (Monroe, Conn.), down to the bronze medal position with a time of 24:46:64 and found gold in the men’s T2. 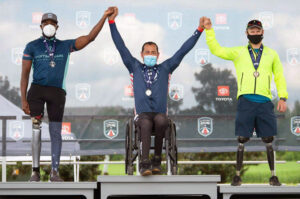 Sanchez, who ended the weekend with another gold medal in road racing, said prior to traveling to Huntsville, he anticipated making the selection to Tokyo, but he had preparation problems.

“In time trials, at least, I could lean into my experience and bike handling to pull off a podium win,” he said.

“It felt nice to be out there on domestic soil getting our grind on,” he said.

On the women’s side, Oksana Masters (Louisville, Ky.) earned gold hardware in H5 (24:34), and Team PossAbilities’ Ryen Reed prevailed in an H4 clock-stopper against Debra Freed of the Paralyzed Veterans of America Racing (PVAR) team.

The sun came out on the course for the C1 to C5 classes and fastest races of the day for upright cyclists and tandem racing, requiring constant communication between the pilot (front) and stoker (back) over each 15-kilometer lap.

“It was motivation to race in my home state,” Schuble said.

To start Day 2, all of the handcycle classifications, 38 men and women including kneelers, raced at the same time in four 19-minute laps on a 7.5-mile course full of world champions.

A crash for Joe Berenyi (Aurora, Ill.) in the men’s C3 road race meant he finished just off the pack but still stepped onto the second-place stand after Noah Middlestaedt (Saint Cloud, Minn.), who rode back to the front after his individual victory. Aaron Keith (Woodinville, Wash.) cheated the wind again, too, leading 15 seconds off of the men’s C1 group. For the second time, he and Todd Key (Scottsdale, Ariz.) finished first and second, and Davis, Masters and Sanchez took no prisoners to try to punch their Tokyo ticket.

Some finishers like Gaertner, who is attempting to make his first Games as a cyclist, are opting out of the Belgium trip in favor of final selections June 19 in Minneapolis.

In the end, every rider was reminded of what it takes and learned something about himself or herself.

“I am still fairly new to this sport, so I learn a lot every time I go to the line,” Gaertner said.

Newcomer and PVAR handcyclist Jackie Jones, who rode in the H4 pack with Gaertner and in a start pack with Sanchez said, “They are all awesome athletes. I knew I was not going to get four laps in, but I enjoyed the experience,” he said.

Overall, it may have been a long climb to get to Huntsville, but Masters’ final thought echoed that of the group when she exclaimed after stepping off the top podium, “Has cycling always been this fun?”

PrevWheelchair Tennis Takes Root
In This Month’s Issue – May 2021Next