In a first-ever virtual Media Summit April 7-9, hosted by the United States Olympic and Paralympic Committee (USOPC), members of Team USA shared ways in which they have rallied during this remarkable year and how time in quarantine gave them a chance to get into even better shape.

Two-time para archer Matt Stutzman (Kalona, Iowa) was both excited and disappointed that the Games were postponed.

“I got to change some things I needed to work on, but it was hard because I make a living shooting a bow and representing Team USA. I basically lost my job and had to figure out how to still chase my dream,” he said.

For the USOPC, making sure its athletes were performing at the best of their abilities also meant providing for them financially and with equipment when 352 NCAA programs got cut as the novel coronavirus (COVID-19) pandemic took hold. In addition, COVID-19 testing is required for upcoming international travel, and ongoing mental health services for athletes have been expanded.

“The pandemic has been disruptive, but we have taken full advantage of the extra year to prepare for this unique environment,” USOPC’s Chief of Athlete Services Bahati VanPelt said during opening remarks at the summit. 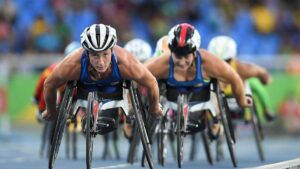 For para cyclists, this meant video game-style workouts; U.S. weightlifters set up gyms in their garages; and Olympic boxing and shooting athletes even set up their spaces in empty department stores.

“At first, I was nervous because the postponement shortened that window to only six months,” she said.

Uncertainty brought a lot of good things, too, and many Team USA athletes said they used this time to rest, start families, buy houses and get married.

Four-time Paralympic tennis player David Wagner (Portland, Ore.) said no matter what or when final selections are made, “we have to be proud of ourselves for the hard work we have put in.”

Being so focused meant there was a greater potential that athletes’ overall well-being suffered. And because no foreign spectators will be allowed in Tokyo, that also means the support usually provided by families and fans has to come from within.

Almost preemptively, the USOPC formed the athlete services division in 2019, and its sport psychologists have maintained virtual appointments with athletes to assist them with the COVID-19 impact.

Sara Mitchell, PhD, is one of seven USOPC psychologists and said taking care of Team USA’s Paralympic athletes’ clinical needs meant wrapping her services around those they receive for preexisting medical conditions.

“The environmental pressures for a Para and Olympic athlete are the same,” Mitchell said. “Our job was to help them manage crises or symptoms along with recovery and performance efforts, so all systems are a go.”

Also different this year for the Paralympics is 1,200 hours of television coverage as (with the exception of men’s sitting volleyball) all qualified para sports will defend a medal in Tokyo.

“We have immense pride in the progress made to increase equal awareness,” said Rick Adams, USOPC chief of Sport Performance and National Governing Body Services.

Despite hardships, in the end, there was no shortage of smiles on Team USA’s faces during the summit.

“We could not be more proud of America’s athletes for overcoming so much,” said Suzanne Lyons, who sits on USOPC’s Board of Directors.

Wheelchair basketball player Matt Scott (Detroit, Mich.), who is heading into his fifth Paralympics for Team USA, summed up, “I hope when people look back on the things I have accomplished that they see someone who was resilient when a lot of things in life – not just my disability – could have stopped me.”

Dates for this summer’s Olympic Games are July 23 to Aug. 8. The Paralympics will be held from Aug. 24 to Sept. 5.