The Best Athlete at Auburn

Wheelchair basketball player, Mack Johnson may be the best player at Auburn

Smiles grow from ear to ear, cheers become loud and clear and murmurs of trash talk circulates throughout Beard-Eaves-Memorial Coliseum as Auburn Wheelchair Basketball head coach Robb Taylor commands his players to set up for five-on-five.

Among those players is Auburn sophomore accounting major Mackenzie “Mack” Johnson. A native of Mauldin, S.C., Johnson is entering his second year with the team.

Johnson is your normal 21-year-old. In his spare time — although he admits he doesn’t get much of it — Johnson likes to listen to music, hangout with his friends or explore outside.

However, NBA Hall of Famer Bill Walton claims that, despite the university’s history of great athletes, it is Johnson who wears the crown as the best athlete at Auburn. Walton’s praise of Johnson came during a live broadcast of an Auburn basketball game that Walton was commentating. The basketball legend’s kind words stuck with Johnson long after that game.

On Nov. 5, 2016, Johnson and group of friends were taking a trip to Gatlinburg, Tenn., when tragedy struck. Johnson, then a sophomore at Wofford University, fell off a three-story balcony fracturing his T-12 vertebrae, instantly paralyzing him from the waist down.

Subsequently airlifted to the University of Tennessee where he spent 10 days doing physical therapy. The next stop for Johnson was at the Shepherd Center in Atlanta for three and a half months of rehabilitation. He then finally stopped closer to home at Roger C. Peace Rehabilitation Hospital in South Carolina. Throughout the process, Johnson was determined to not let his injury get in the way of what he loved — sports.

“The most difficult part (of my injury) was just redefining myself. Coming out of high school, I think everybody has this idea and dream of the path they want to take and where they’re going to end up,” Johnson said. “People always say ‘Where do you see yourself in five years?’ I never would’ve seen myself and thought ‘Oh yea, I’m going to be in a wheelchair’ It just happens. Life happens.”

Since his injury, Johnson has worked tirelessly to create a new mindset. That is what got him through the intense physical therapy and recovery. Johnson was determined to make the best of his situation. Luckily for him, an opportunity to do just that came metaphorically knocking on the door.

“Around that spring, I saw a Facebook post about the Auburn Wheelchair Basketball Camp, and I was just sitting there. I had nothing to do. I was sitting at home a lot, and I thought, ‘It’s $50, it’ll get me out of the house, maybe I’ll see somebody cool — whatever.’,” Johnson said.

The team is led by Taylor, a veteran coach who is entering his third year with the Tigers program. As a relatively new program, the team has struggled to keep up with stronger competition.

This inexperience is most evident when looking at the team’s biggest rival, Alabama—a program that has won seven of the last 10 national championships in the sport. While the Tigers may be struggling now, they are undoubtedly a program on the rise, a rise that Johnson is a big part of.

After the two-day camp, a month prior to registration, coach Taylor offered Johnson a spot on the team.

“I was planning on going back to Wofford, but I ended up coming here and was like, ‘Hey, let’s try something new. If I don’t like it, I can always go back home.’ But ever since I’ve packed my bags and left, I haven’t looked back and I love it,” he said.

Back in the Game

As the five-on-five scrimmage continues at dusty, word-down Beard-Eaves Coliseum, Johnson’s passion for the game undoubtedly shines through. The game is tough and arguably more physical than its non-wheelchair counterpart.

The players are constantly communicating and for good measure, a healthy dose of expletives and trash talk are often thrown in the mix. The sight is both chaotic and loud but at the same time, calculated and poetic.

As the specially designed wheelchairs elegantly glide across the bright, shiny Beard-Eaves floor like butter on morning toast, Johnson gets in a tangle with another player resulting in Johnson’s wheelchair tipping over sideways. Without much thought or chagrin from those around him, he effortlessly picks himself back up and gets back on defense.

Outside of Auburn, Johnson does a multitude of things to inspire and help others in his situation. Johnson is part of a peer-support program at the University of Tennessee and the Shepherd Center, where he has the opportunity to talk to those who are brand new to similar injuries.

“I’ve helped some guys by just being there to talk, if they have any questions — it’s difficult and definitely a new situation,” Johnson said.

Other than the peer support program and thanks to the advice of Bill Walton, Johnson works with the Challenged Athlete Foundation, (CAF), a national program with the goal of helping those with physical challenges pursue active lifestyles through fitness and athletics.

“Mack and Bill have an incredible relationship. It’s a great relationship that’s built on trust,” Taylor said. Bill thinks very highly of Mack and he realizes that Mack is more than just a student and an athlete.

The compliment that he paid him, in my eyes, was not to knock anyone else we have on campus but to highlight the relationship that the two of them have. Bill recognizes the work that Mack puts in on and off the court and the amount of work that Mack does with organizations like the CAF. So, I think that’s kind of where that glowing remark, that great compliment came from.”

Back at Beard-Eaves, Johnson misses a shot. Noticeably upset with the play, a teammate quickly attempts to get Mack to focus again. “Mack, feel sorry for yourself later,” he says.

Down seven with just over three minutes to go, there’s plenty of time to mount a comeback.

A football player in high school, Johnson is a natural competitor. Taylor said that competitive fire became initially apparent during Johnson’s first season with the team. Facing off against a national-title-contending team in Alabama at a tournament in Tuscaloosa, Taylor put Johnson in a tough situation.

“I remember putting Mack in the game, and I was like, ‘Hey, listen, you’re going to have to go guard the guy from Australia who’s 6’9”. Mack, you got to go out there and just try to keep a chair on him.’ and he did a great job. He didn’t back down,” Taylor said.

The guy scored from time to time, and you expect that, but it was just kind of the fight and the passion, and it was almost like you saw the football player come out again.”

Not only does Johnson receive praise from the coaching staff, his teammates hold a high opinion toward the sophomore.

“He brings great energy. He’s a motivator. In the time that you need motivation, he’s there on and off the court,” Ranley Clayton, a former roommate of Johnson’s. “If you’ve got an issue, you can talk to him. He’ll give you advice, or he’ll find someone who could help you — just a good guy all around.

Despite the lofty title bestowed upon him by a basketball legend, Johnson is just a normal college student albeit one with a big heart and passion for sports.

“A lot of people see the chair and just automatically assume a list of things you can and can’t do,” Johnson said. “I remember being a little kid and going up to AutoZone with my dad, and a guy with a wheelchair came out with some parts and hopped in his car, and I was like ‘What? How did he drive?’ Then, when it happened to me, I was like ‘Okay, it’s not that hard.”

Through his work helping others and his strong work ethic on and off the court, Johnson has prevented his injury from defining him and as a result, has become the best athlete at Auburn. 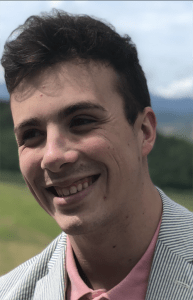 About the Author – Cole McCauley is a senior journalism student at Auburn University with a minor in Italian. He has written for the Auburn student newspaper (The Plainsman) and is currently an intern at The Auburn Villager. He plans on graduating Auburn this Spring and has accepted an eight month teaching internship in Lombardy, Italy.

PrevBehind the Scenes of In Plain Sight
Boston Marathon WinnersNext