The Road to IWAS – Josh Winsper

From field of dreams to international track and field athlete, one Rochester resident is about to take center stage at the IWAS Youth Games

Josh Winsper was a baseball player.

He had every intention of continuing his childhood baseball career at Old Rochester Regional High School in Massachusetts and was at the athletic department’s mandatory concussion awareness meeting before the season during his freshman year when he met Bill Tilden, the athletic director. It would have been a harmless encounter, and Winsper would have spent his spring among sunflower seeds and bubblegum, if only Tilden had not doubled as the track and field coach.

“After talking about my ambition to play baseball, he suggested ‘Why not track?’” Winsper recalled. “I would be one of his throwers. After that encounter, I never saw the baseball diamond again.” 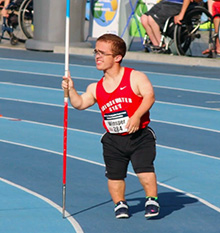 Winsper, now a sophomore student-athlete on Bridgewater State University’s track and field team, ended up competing on the winter and spring track teams at Old Rochester throughout his entire high school career. An integral member of the team, there was no chance for Winsper to compete at any Massachusetts Interscholastic Athletic Association (MIAA) events – mainly, the prestigious end-of-year state title meets – until his junior year. With the launch of the MIAA’s adaptive sports initiative in fall 2015, Winsper was finally able to take his competition to a larger stage, throwing in state, divisional and all-state contests.

The 20-year-old, who lives at home in Rochester, Mass., with his parents Karen and Jim and younger sister Julia, has competed in a number of national and international competitions, recording personal bests of 9.34m in the shot put and 27.01m in the javelin. His resume includes the World Dwarf Games and National Junior Disability Championships. For the past two summers, he has competed at the U.S. Paralympic Trials and U.S. Paralympic National Meet. This July, he will take his competition across the pond to the International Wheelchair and Amputee Sports competitions in Athlone, Ireland.

“I still have a lot to learn, and Ireland is another opportunity for me to learn how to manage being a high-level athlete,” Winsper said. “I wasn’t expecting to be selected. After I got the call, it kind of took a while to sink in. I am excited to be competing this summer and to be representing Team USA.”

After returning from Ireland and finishing his education at Bridgewater State, Winsper hopes to make the U.S. Paralympic team in 2020 or be a contender for a spot in 2024 or 2028. Looking further ahead, he hopes to work with disabled athletes to recruit and train them for elite competition in an effort to give others the same experiences he has had.

“All the connections I have made and will continue to make through Paralympic sport is something that I wouldn’t have known about if I never saw these opportunities,” he said.