Things to Know About the 2016 Stance ISA Worlds

Adaptive surfers from across the globe are ready to hit the waves in Calif., during the 2016 Stance ISA World Adaptive Surfing Championships

The 2016 Stance ISA World Adaptive Surfing Championship presented by Vissla and the City of San Diego is set to gather the world’s best surfers with physical challenges to unite and compete at La Jolla Shores beach in California from December 8-11. 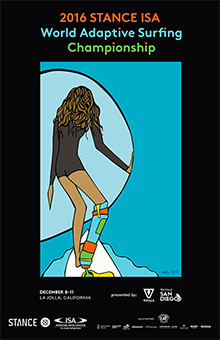 Renowned San Diego artist Andy Davis partnered with the ISA for the second consecutive year to apply his unique style to the event’s artwork.

Here are a few things you need to know about the competition:

Adaptive Surfing and the ISA

After the first edition of the event drew unprecedented attention from adaptive surfers worldwide, the ISA is proud build upon that success and host the second annual edition again in La Jolla, California. The event has created a wave of growth that has spurred the development of Adaptive Surfing programs around the world in countries such as France, Australia, Chile, Brazil, USA, Hawaii and South Africa, which all held national championships to field teams for the competition.

The World Championship will be streamed live on www.isaworlds.com from December 9-11. Visit the official event website for results, photos, videos and news pertaining to the competition.

Fellipe Lima (BRA) will return to defend his Gold Medal in the AS-3 Division. Photo: ISA / Reynolds

Stance, an innovative, industry-leading lifestyle brand and presenting sponsor of the inaugural competition in 2015, has stepped up as the Title Sponsor – boosting their strong support of Adaptive Surfing and the ISA.

The ISA would also like to thank Vissla and the City of San Diego for their commitment and support of the competition, joining the event as presenting sponsors.

Representative of the global growth of Adaptive Surfing, the ISA has added two new divisions to the second edition of the competition. This year will feature two divisions for standing athletes depending on function, as opposed to one in 2015, and a visually impaired division.

The divisions will be as follows:

Coming off the back of Surfing’s recent inclusion on the Sports Program of the Tokyo 2020 Olympic Games, the ISA is committed to fostering the growth of Adaptive Surfing and creating the proper pathway for inclusion in the Paralympic and Parapan Am Games.

The Adaptive Surfing Symposium will be held Wednesday, December 7 from 4pm – 8pm at the La Jolla Recreation Center. The symposium is aimed at building on the profile and platform of the World Championship to raise awareness, share best practices and initiate a conversation about how Surfing can play an ongoing and vital role in enriching the lives of physically challenged athletes.

The Stance ISA Adaptive Surf Clinic will provide an opportunity for adaptive surfers of all abilities to receive expert instruction and improve their surfing skills. Photo: ISA / Reynolds

All Times in Pacific Standard Time.

Recognized by the International Olympic Committee (IOC) as the world governing body for Surfing, the ISA’s mission is to create a better world through Surfing. This is accomplished through annual World Championships for surfers representing their countries, development of Adaptive Surfing, membership development, educational programs, scholarship distribution and preparing for Surfing’s participation in the Olympic Games.