With the help of the National Football League-Bob Woodruff Foundation Healthy Lifestyles and Creating Community (HLCC) grant, Disabled Sports USA says the league will kick off in the fall by fielding teams in Chicago, Los Angeles, Phoenix and Kansas City, Missouri.

During the NFL Draft, April 23-25, a wheelchair football athlete will participate in making a team pick, marking the first milestone of many to come thanks to the NFL’s support of the Wheelchair Football League and DSUSA.

The Opportunity of a Lifetime

The NFL has selected retired U.S. Marine Corps Staff Sergeant, Brad Lang to represent DSUSA by helping to announce a draft pick for his beloved Carolina Panthers. Lang, a Purple Heart recipient, was severely injured during a tour of duty in Afghanistan. After losing both of his legs to an improvised explosive device (IED) in 2011, Lang became a strong advocate for DSUSA and will be among the first athletes to participate in the newly formed Wheelchair Football League. This new endeavor is DSUSA’s latest initiative to provide adaptive athletes with another avenue to fulfill their sports dreams.

Since its launch, Warfighter Sports has provided no cost adaptive sports opportunities to more than 15,000 severely wounded, ill and injured veterans as well as active duty service members and families nationwide.

“We believe that sports has the unique power to bring people together and to push them beyond what is possible, redefining their ability” says Glenn Merry, Disabled Sports USA Executive Director. “We are excited to launch the Wheelchair Football league in cadence with the NFL Draft driving a new generation of aspiring athletes to reimagine this ability.”

“As we look forward to brighter days ahead, we at the Bob Woodruff Foundation are excited to work with DSUSA and our NFL partners to develop this groundbreaking league and help bring wheelchair football to veterans across the country,” says Anne Marie Dougherty, CEO of the Bob Woodruff Foundation. “With this NFL-BWF grant, DSUSA will develop the framework and necessary elements of the sport that DSUSA chapters and other adaptive sports programs can use to ensure wheelchair football is available to anyone who wants to play America’s game.” 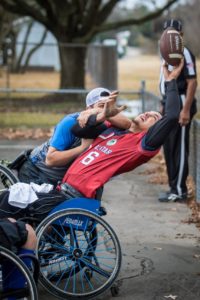 For adaptive athletes, football is more than a game. Another one of the athletes participating in the inaugural league is former U.S. Marine Corps corporal, Bart Salgado, who helped build the Wheelchair Football League.

“Being active and finding an outlet in sports not only helped me heal physically but mentally, too,” says Salgado. “It’s impacted my life in more ways than one and inspired me to chase my dreams.”

With a passion for football and determination to live without limitations, Salgado helped organize the Blister Bowl, a wheelchair football tournament, in the early 2000s. Using his experience, Salgado later served on the Rules Committee and helped structure the rules and guidelines for the upcoming league. Salgado will serve as head coach for the Angel City wheelchair football team in Los Angeles.

“It’s unbelievable to see how far I’ve come. I’m grateful to have a hand in starting this league and I can’t wait to see it highlighted during the NFL Draft,” says Salgado.

Lang will represent the Wheelchair Football League during the NFL Draft on Saturday, April 25.