Wheels UP! Meet the Judges

We’re stoked to have so many awesome photo judges joining us for this year’s Wheels UP! Photo Contest.

As a lover of being active, Clint Cook encourages all wheelchair users to be active, whether its playing sports, traveling or finding a hobby that gets you out of the house.

“I think it’s important to get involved or stay involved in your normal activities and travel that you enjoyed before your injury or disability because it keeps you out of your head and keeps your mind on things other than being in a wheelchair,” Cook says.

After a car accident in 1988, Cook sustained a C5 spinal-cord injury (SCI) and became an incomplete quadriplegic. He has been a wheelchair user for 30 years.

Cook is makes it a priority to help other with living with an SCI. He started a support group on Facebook called “Spinal-Cord Injury USA” that has over 1,500 members. He is also a peer counselor at the Shepherd Center and leads many SCI group functions in Atlanta.

Cook is also an athlete and was one of the founding members of the Atlanta quad rugby team back in the late 1980s. He has played sports such as quad rugby, wheelchair tennis and most recently, billiards.

When it comes to the winning WheelsUP! photo, Cook will be looking for a photo that shows adventure, risk and speed.

“So maybe someone next to their hot rod car,” he says. If you’re looking for a reason to be active, Cook has some advice for you.

“Don’t wait until you walk again to get involved. I’m not saying give up on that, just get on with life as if this is the way it’s going to be,” he says. “If you walk again, that’s great. If not, that’s fine too, at least you haven’t missed out on life, family, sports, hobbies and traveling. So many people wait to do things until they feel normal and miss out on the big picture, which is being healthy and life itself.”

For Chad Waligura, if he’s not outdoors, he’s not happy.  So much so, it lead him to create Able Outdoors Magazine, a publication for sportsmen and women and their families living with disabilities.

Waligura, who earned his B.S. degree in Wildlife Sciences from Texas A & M, spent much of his childhood exploring his grandparents land in the country. There he discovered the beauty and excitement of the outdoors. From hiking to camping, hunting and fishing off the Texas coast, Waligura has given it a go. 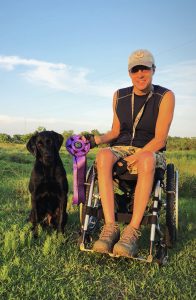 “My favorite memory post-injury was being able to join an Elk hunt one season in the mountains of New Mexico,” says Waligura. “The inaccessibility alone made it a rare opportunity for me.”

With all that outdoor experience under his belt, along with his editorial career, it was a no-brainer that he come on board to help judge this year’s WheelsUP! Photo Contest.

“Photography is one of my newest passions and since we started Able Outdoors magazine it opened up a whole new appreciation for it for me.”

Chad is also a Cure Medical Advocate and writes for Cure Nation.

Julianne Dallara is a former actress, singer and dancer. Throughout her life she has been active, whether it was through her dancing, being a lifeguard or raising her two children. One day in 1996, Dallara woke up and was paralyzed from the waist down. After many days in the hospital, doctors were still confused what had caused her paralysis.

It wasn’t until later that she was diagnosed with transverse myelitis, an inflammation of both sides of the section of the spinal-cord which interrupts that messages that the spinal-cord nerves send throughout the body. Despite her diagnosis, Dallara has continued to be active. 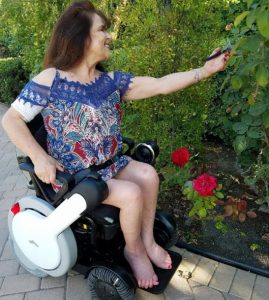 “I think it is important for people with disabilities to get out in the world for their own sense of confidence and perspective,” she says.  “The world outside one’s home is more hospitable and less scary that one would think. An ancillary benefit is to our fellow humans ­­– other people are ‘inspired’ by seeing us and they frequently remark ‘I thought I had problems, but now I see they’re not all that bad.’  Somewhat depressing to think of ourselves as someone else’s worst case scenario, but if it brings perspective to others, I believe that it is worth it.”

Dallara raised her two children alone and stayed active in any way she could. Dallara sold adaptive vans for 16 years. In 2012 she began working for the Abilities Expo as an independent contractor.

As for the winning photo, Dallara will be looking for one that is nice and in focus, creativity and a picture that tells a story. When it comes to making your trip more accessible in a place that might not be too accessible, Dallara says to compliment first, then point out what isn’t accessible.

Wheelchair athlete, Chris Malcom, strongly believes in being active in any way you can.

“Being active is a huge contributor to staying healthy,” he says. “I’m a firm believer that the healthier and more active a person is, it makes things easier and lessens complications the longer the person is injured.”

The 48-year-old sustained a C7 spinal-cord injury (SCI) after a car accident in 1991 which resulted in him becoming a quadriplegic. Since his injury, Malcom has strived to be active and play sports, including wheelchair racing and quad rugby. 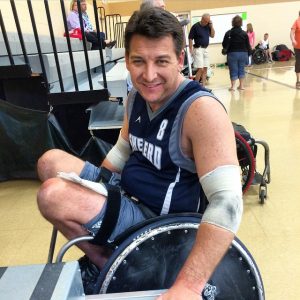 “My advice would be, if you’re not active, do anything that promotes activity to get healthy and stay healthy. For those already active, stay active and get healthy,” he says. “I personally know how hard it is to get back healthy and stay in shape after you get out of a certain routine.”

Malcom is also very involved in the SCI community. He is the founder of First Source Catheters, iPush Foundation and he is a part owner at At Home Medical. Malcom is also a mentor at the Shepherd Center.

When it comes to a winning WheelsUP! Photo Contest photo, Malcom will be looking for photos that “push the boundaries and will show people doing things that an able-bodied person would assume can’t be done.”

If you’ve ever hit the waves or shredded a skatepark, chances are you’ve come across Christiaan “Otter” Bailey. He is world renowned for his surfing skills and WCMX moves and with good reason.

Since his spinal-cord injury in 2006, Bailey has gone on to become captain of USA Surfing, is a four-time USA National Champion, ISA World Adaptive Surfing Championship medalist and of course, our 2012 Get Out, Enjoy Life photo contest winner. 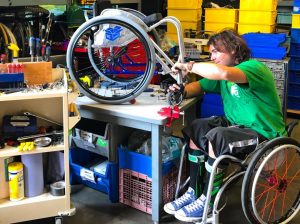 Many of you may recall his winning photo, “Shark Attack,” as Bailey is seen dropping into a 13-foot bowl during the Nike US Open of Surfing.

Well, now he’s dropping in to be one of six judges for our brand-new Wheels Up photo contest and we’re stoked to have him on board.

Since his iconic photo splashed across the September 2012 cover of SPORTS `N SPOKES, Bailey has been bouncing across the globe putting on WCMX clinics in different countries in an attempt to grow the sport for the next generation.

In recent years, his primary focus has been on the development of adaptive surfing and progression to the Olympics/Paralympics starting in Tokyo 2020.

Apart from sports, he spends a lot of his free time volunteering and traveling with an international NGO called, Global Mobility and distributes wheelchairs to kids in third world countries.

For more information about Global Mobility, visit them at http://www.globalmobilityusa.org/home

As a mother and entrepreneur, Kristina Rhoades feels that having an active lifestyle is very important. Rhoades has spent her whole life in a wheelchair after getting injured at just 10 months old, which resulted in a T5 spinal-cord injury. Although she was injured before the age of one, her sense of adventure never dwindled. Rhoades and her family are very active. 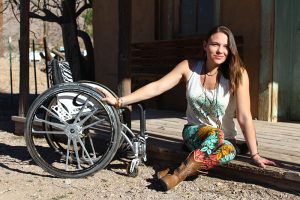 “Regardless if someone has a disability or not, I believe we are here to experience all life has to offer,” Rhoades says. “There is so much wonder and beauty and adventure out there waiting for us. Although it can, at times, be more challenging to travel with a disability, it doesn’t have to keep us from getting out there.”

Rhoades has dedicated her life to mentoring people. At the age of 16, she became certified as a suicide intervention and domestic violence mentor which soon lead her to become a life coach for people who need help or just need someone to talk to. Rhoades is also the founder of the Flower of Life retreat in Truth or Consequences, New Mexico, which is where guests can come to reconnect with themselves and heal themselves with activities such as art class, horseback riding, accessible yoga, nature walks and more.

“Life is short, so get out there and live it,” she says. “We’re sure to encounter obstacles along the way, and if we can be okay with that, we’ll enjoy ourselves much more. I also suggest asking for help. And, trust me, I understand how valuable our independence is. But, if we’re willing to take the assistance, there are so many people and organizations out there that would love to help us accomplish just about anything we can think of.”

When it comes to the winning WheelsUP! photo, Rhoades will be looking for fun candid shots that show action and help communicate the experience. “I’d love to see some creativity with angles and some unique settings,” she says.

Bob Yant dedicates his life to helping find a cure for spinal-cord injuries (SCI). Yant broke his neck as a result of hitting his head on a sandbar in 1981 and sustained a C-5 SCI. 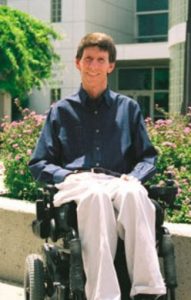 Yant was a member of the national board of directors of the Christopher and Dana Reeve Foundation for 29 years. Since his injury, he has helped raise over $16 million for spinal cord research.

Yant founded Cure Medical, a company that makes safe, comfortable and easy to use catheters. Cure Medical is the only company in the world that gives 10% of their net income to fund paralysis research for a cure.

Yant’s dream is to “help develop nerve regeneration that causes recovery in people who live with paralysis.”