Wheels Up! Wrap Up

It’s a wrap and we have a winner for the 2018 Wheels Up! Photo Contest

From pushing to cycling to wheelies or flying, this year’s photo contest focused around you and how you face the world Wheels UP!

It’s been 7-years since we got out and enjoyed life and we thought a bit of a change was in order. With the help of our contest partners at Cure Medical, the Spina Bifida Association and the Abilities Expo, we took everything you loved about the Get Out, Enjoy Life contest and switched it up this year – bringing the focus on you, your journey and how you get your Wheels UP!

Over the years we’ve seen some awesome photos, so it wasn’t a surprise when the Wheels UP! entries came rolling in. What was unexpected was the sheer number of pictures we received this year. From September 1 through September 14, we received over 550 submissions.

Although the contest was only open to our U.S. and Canadian fans, that didn’t stop followers from across the globe from taking part in the Wheels UP! Photo contest. Fans like Brett Ladbrook in New Zealand, Johannes Weber in Germany and Drea Stockelmajer in Austria, there was no limit to the activities – swimming, hiking, traveling, wheelchair basketball and so much more.

With so many photos to look over, we invited a few “celebrity judges” to help sort out this year’s winners. And who better to help pick the best of the best other than people from right within the disability community?

These judges poured over each picture and voted on their favorites based on composition, action, quality, moments, emotion and more. And after much consideration, and a few emails back and forth, they picked four winners for the 2018 Wheels UP! Photo Contest. 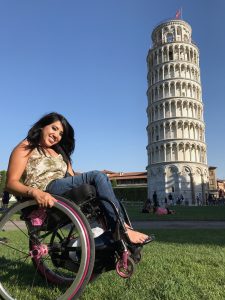 For 28-year-old Juliet Justice, a family trip to Italy, a celebration of life and her passion for adventure ultimately lead to her “Leaning Tower” photo landing this year’s front cover of SPORTS `N SPOKES.

The Gilbert, Ariz., native has a yen for travel and despite living most of her life with a spinal-cord injury – the result of a chemotherapy overdose when she was 7-years-old, she never lets her disability stand in the way of another new adventure.

For the Pisa, Italy adventure, it was two-fold as she embarked more than 6,000-miles away from her native Arizona to celebrate 20-years in her wheelchair.

And while most people might think that an unusual anniversary to mark, for Justice, it’s all part of her journey.

“Living with SCI has brought so much beauty into my life that I celebrate it every year,” says Justice.” I don’t have big parties or anything of that sort but every year I do something to mark the moment.”

Justice picked this picture for the contest for the memories it holds. She went on a cruise with her parents and husband, Michael, to celebrate her 20th year in a wheelchair. It also marked a few other huge milestones for her. Graduating college, landing the perfect job and marrying her true love.

But, the trip to Italy, the photo and landing the cover of SPORTS `N SPOKES almost didn’t happen. Weeks before her trip, she was in surgery having a ruptured appendix removed and along with it, her dream of seeing Italy was up in the purview of chance.

“After going through that surgery and hospital stay, I knew I had to go to celebrate surviving another thing,” says Justice. “I have learned that I was made to rock this life. I love every part of my story and I can’t wait to see what the next 20 years will bring.”

While life may have challenged her early on, rocking this life is just what Justice has in store. She’s currently training for the Disney World Half Marathon and plans to continue her travels aboard. Of all the challenges she faces, her biggest one is being different.

“I’m proudly different, and now I use it as my superpower,” says Justice.

SNS: What we liked about it – It’s sunshine on a wheelchair. It’s a daydream come true. Juliet’s photo captured her positive attitude, passion for life and sense of adventure. She even managed a wheelie in true Wheels UP! fashion. 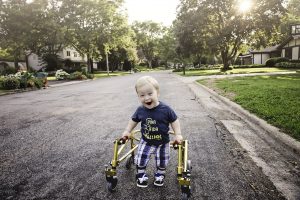 At just 20-months old, it wasn’t hard to spot Wheels UP! second-place winner, Griffin Anderson’s smile from the hundreds of photos that were submitted and that’s because this little guy has got it going on.

Griffin was born with spina bifida, and according to Stephanie has been working day after day to master his little walker and take command of his mobility. Judging by the look on his face, he’s pretty proud of his progress.

“Griffin has been working all summer on walking and learning to use a walker,” says Stephanie.  “Every night after work we would take him outside and see how far he could walk. It was fun to see him go a little farther every day, and all of our neighbors loved to cheer him on. One night I decided to capture some pics of his hard work. I’m so glad I did! Shortly after I took this picture he started walking right out of the walker and is now walking independent of it!

Charm, determination and an entire community of folks cheering him on is bound to leave a lasting impression on Griffin and we’re pretty certain this isn’t the last we’ll see of this guy.

SNS – What we liked about it – It’s wholesome Americana at its best. It’s Norman Rockwell meets Frank Capra and it made us think of baseball, apple pie and Chevrolets.  Stephanie captured Griffin’s innocence and determination perfectly and that’s why he is this year’s Final Frame. 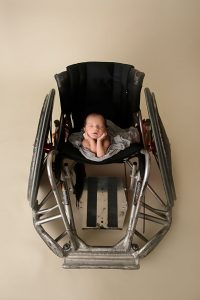 Due to its charm, the judges chose Daniel Pitaluga’s photo, “Baby Rugby,” a photo of his 10-weeks-old son, Joey, posing in a sport wheelchair. Daniel wanted to incorporate two of his favorite things in one picture – his son and wheelchair rugby.

As his son grows older, there is something Daniel hopes Joey learns about disabilities.

“I hope he learns about inclusion, reality and intolerance for discrimination, and how disabilities drastically change people’s lives. Lastly, [I hope he learns] how he can help others,” Daniel says.

Daniel was in a car accident in 2009 which led him to sustain a C6-C7 SCI, resulting in him being a quadriplegic. Adaptive sports, such as wheelchair rugby, have helped keep Daniel’s weight and health stable. He is also thankful for adaptive sports because they are a stress reliever for him.

Daniel’s third-place prize winnings are: Spoke of the Week on sportsnspokes.com, a $200 gift card from At Home Medical and two issues of the November 2018 SPORTS `N SPOKES magazine.

SNS – What we liked about it – It’s pure and adorable nature draws anyone in, with a sweet sleeping baby on a sport wheelchair. It makes us think of a more inclusive future – where children will grow up and see disabilities in a different light, where people will see past someone’s disability and that teaches people that life doesn’t have to end or slow down because of an injury or disability. 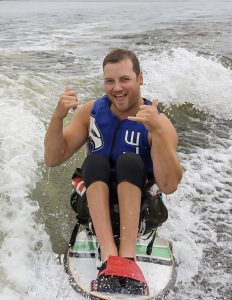 Brian Rowland’s photo, “Surfs Up, caught the eyes of the judges, rewarding him the spot of honorable mention. In his photo, Rowland is wake surfing on the Rideau River in Ottawa, Ontario, Canada. The Merrickville, Ontario, Canada native endured a T-12, L1 complete SCI in the spring of 2015 after a motocross accident. Prior to his injury, Rowland had never been surfing before. Now, after his friend found a way to make wake surfing adaptive, Rowland goes wake surfing three to four times a week in the summer.

“My favorite thing about wake surfing is the freedom of being pushed by the waves and not relying on anything else but the water,” Rowland says. “I just focus on the water and try to take it as it comes.”

Wake surfing is not the only adaptive sport Rowland participates in. His passion lies in adaptive skiing. He is currently training to get on the national alpine skiing team with hopes to make it to the Paralympics by 2020.

Brian’s Honorable mention haul includes: His winning photo posted to all the social media pages from each contest partner, a Water-One Pure2Go portable water purifier Go-Kit for those times he’s Wheels UP! without clean water and one issue of the November 2018 SPORTS `N SPOKES magazine.

SNS – What we like about it – It makes us think of summer and being by the ocean. We can automatically smell sea salt, BBQ and sunscreen. It reminds us of long days and melting popsicles. It makes us want to try new things and never give up on finding ways to make life adaptive.

Thanks to our contest partners Cure Medical, the Spina Bifida Association and our friends from Abilities Expo for helping put this all together.