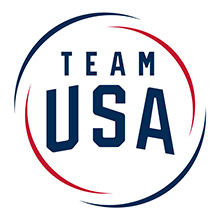 2016 Rio gold medalists Rose Hollermann of Elysian, Minnesota, and Abigail Dunkin of New Braunfels, Texas, return to lead the team at the 2018 IWBF World Championships. Although they are only 22-years-old, the two women will serve as the veterans on this team. This is one of the youngest women’s team rosters, with an average age of 18.5 years old.

“We have an incredibly young group with a lot of potential and energy,” said U.S. Women’s Wheelchair Basketball Head Coach Trooper Johnson. “It’s great to see this group of young women start the process of pushing this sport forward so early and it will be exciting to see how they perform in the World Championships.”

The two returning U.S. Paralympians will be joined by their University of Texas at Arlington teammate, Morgan Wood of Gordonsville, Tennessee.

The other collegiate players who made the cut are Josie Aslakson of Jordan, Minnesota (NYU); Kaitlyn Eaton of Houston, Texas (Univ. of Illinois); Shelby Gruss of Ossian, Indiana (Purdue); Emily Oberst of Brookfield, Wisconsin (Univ. of Illinois); and Lindsey Zurbrugg of Portland, Oregon (Univ. Wisconsin-Whitewater).

The rest of the roster includes seven athletes that are still in high school: Ixhelt Gonzalez of Chicago, Illinois; Ali Ibanez of Murray, Utah; Riley Ljungdahl of Longmont, Colorado; and Bailey Moody of Alpharetta, Georgia.

Ixhelt Gonzalez, who plays for the NWBA’s Chicago Skyhawks is the youngest player on the roster at 13-years-old.

U.S. Women’s Head Coach Trooper Johnson of San Lorenzo, CA, will coach Team USA for his first World Championships team. Johnson is a National Wheelchair Basketball Hall of Famer and is the only player to make the national team 15 times. He was an assistant coach for the Women’s National Team in the 2016 Rio Games, where the team took home a gold medal. Joining Johnson on the sidelines will be assistant coaches Amy Spangler of Madison, Wisconsin, and Adam Kramer of Northport, Alabama. Athletic Trainer Karla Wessels of Lexington, Kentucky, and Team Leader Kearstin Gehlhausen of Denver, Colorado, return for a second term.

The 2018 IWBF Women’s World Championships pools were established in late January. Team USA will square off with Algeria, Argentina, China, France, and Germany in Pool B. In Pool A, the following countries will play for advancement: Australia, Brazil, Canada, Great Britain, Spain, and The Netherlands.

The U.S. Women’s returned to the top of the podium at the Rio Paralympics, marking the third Paralympic gold medal in the last four Paralympics Games (2004, 2008, and 2016). The U.S. Women’s team dominated the field in Rio going undefeated, 7-0, and maintains the medal count lead with seven Paralympic medals, including four gold medals.

Team USA led six statistical categories over the seven-game stretch at the Rio 2016 Paralympics. It is the third time that the United States has gone undefeated at the Paralympics, en route to the gold medal. Team USA led shooting percentage at 53.8 percent; points for at 505 points (72.1/game); assists with 178 (25.4/game); fouls with 55; and the least turnovers at 61 (8.7/game). The United States was second in points against with 42.3 per game.

Up next for Team USA is a series of domestic training camps for the National Team in preparation for a couple international competitions this summer in final preparations for the 2018 IWBF World Championships.